What’s not to like? Late winter and early spring are dominated by yellow flowers and here’s a red.  OK mixed with yellow it might offend some people, but I reckon the biggest reason it’s avoided is snobbery.  People aren’t satisfied with its effects.  They don’t grow it because it’s planted up and down the street.

Anyway, it has drawbacks – life after flowering is a bit dull – the foliage is nothing special and, it can be shapeless.  So, Edmund my son set out to make it better.  Ideally he needs a Ribes (it’s Ribes Sanguineum) with darker foliage because he’s trying to breed a dark foliage form.  We’ve tramped up and down commercial nurseries looking at their stock, visited Botanic Gardens and asked around but so far there’s nothing out there that could be used for breeding apart from a cut-leaved form of blackcurrant (Ribes nigrum) from Jo Sharman and he’s working on that.

Meanwhile he’s accumulated plants of most of the known species and hybrids, planted them together, left the bees to pollinate them, harvested the seed, raised young plants and planted them out in two trial beds.  2020 is the first year we’ve had decent flower.

Unsurprisingly there are no interesting foliage forms but there are some plants with different habits (shapes) and different flower forms. What do you think? 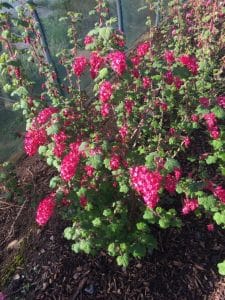 Hybrid D has flowers which are a bluer red than existing forms like ‘King Edward VII’ and ‘Koja’. ‘Koja’ is illustrated on the right for comparison. (It’s a compact form).

Hybrid Y is a new white-flowered form.  There’s a hint of pink at the end of the tassel where the flower buds are unopened. 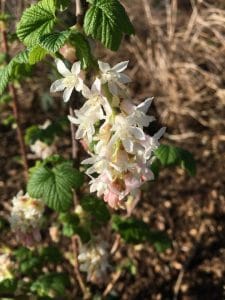 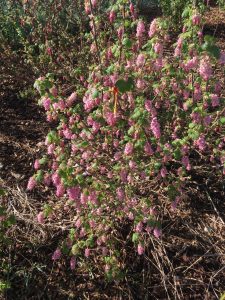 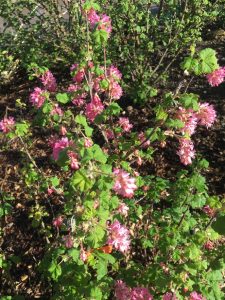 There are more but these are (so far) the most distinctive. Roll on that foliage discovery!