Have you noticed how good they are this year?  There’s more flower and the leaves have much less fungal rust than normal.  Overall, they simply look super.  These days they’re rarely planted.  The ones you see have probably self-sown over generations from plants sown or put in maybe as far back as the beginning of the last century.  They self-sow into cracks into which no human gardener could wheedle them.

Brian was an especial fan and determined to breed the first rust-resistant strain as a project for his retirement.  He started by collecting as many species from their native habitats across the Middle East and Eurasia – there are about 60 in total.  Just getting them was in itself a major project.  The motivation was that natural species in native habitats don’t suffer from rust very much – so he believed that maybe they had natural rust resistance.

Sadly, the project failed before it really started because when grown in Britain every species suffered equally badly from rust.  It’s interesting that this year they haven’t suffered much from rust – at least in Worcestershire – and I can only conclude that the hot dry spring somehow inhibits the pathogen. 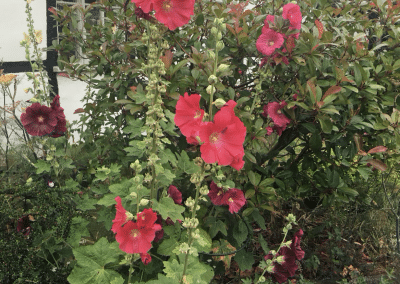