It’s very beautiful, immensely invasive, a problem weed in the west of Britain and, I’ve discovered today, wonderful in pesto.

Mine arrived on the nursery God knows how.  I try to dig it up and pull off the seed heads before the seed is released but it continues to spread.  I believe it sends out stolons underground and forms bulbs nearby as well as self-seeding.  It appeared as early as January this year and has started to flower already.  The flower stems are triangular when you roll them between your fingers and the leaves angular and channelled.

Put a hefty pinch of salt in a food processor, a big handful of Allium triquetum leaves and/or flowers, 2 handfuls of nuts or ground nuts (probably not walnuts which are too bitter, raw peanuts might work but I’ve never tried them) and a lump of cheddar cheese about 3cm cubed.  Whizz it up, take off the lid and scrape down the bits flung onto the sides and pour over some olive oil (? half a teacup) and whizz again. Take off the lid again and spread the mixture across the bottom then pour over some water.  I’ve never measured the amount but too little will make a stiff paste.  The paste (pesto) should be just stiff enough to form a low mound.  It thickens with time (about 20 minutes).  Its an emulsion.  Serve it with spaghetti.  Yum yum! 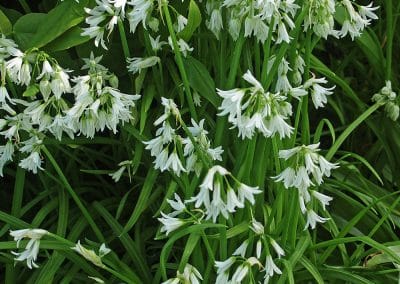