(Reproduced from ‘Cotswold Garden Flowers’ catalogue 2004 and amended under lockdown in April 2020.)

Winter is coming as I write on 13th October.  Gardeners are a special group of people who do not live for the moment – what drives them on is the future.  When they say in August that, “The starlings have begun to make their winter burbling noise”, or, “There will be lots of berries for Christmas”, they are not wishing heir lives away (as my wife comments) but looking forward, because looking forward is their driving force.  On October 13th, I am looking forward to the plants that have begun to appear now, and then stand over the winter, and I mark October out as a new beginning. One of the most delightful is what I still call Arum italicum ‘Pictum’ (aka ‘Marmoratum’).

The species (Arum italicum) puts up new foliage in October that lasts ‘til May when it dies down.  The term ‘wintergreen’ is very appropriate. In frosty weather, the leaves bend to the ground, but recover immediately the frost has melted.  The leaves are dark green and hastate (arrow shaped) and grow to about 30cms long by 30cms high, although it takes a few years for the plant to produce leaves this big.  When picked, the leaves last very well in water and have sufficient depth of colour and lack of yellow-greenness to set off, well, everything else in the vase.  The plant will grow anywhere – even in the dry, rooty shade under yew and beech trees, although, if grown in very dark places, the leaf patterning reduces.  The tall, wide, pale green arum flowers appear in April and set vermilion seed heads that grace the garden from August to October. Despite its name, Arum italicum is a British native plant.  I have seen it in woods on the Isle of Wight.

Left to their own devices, the plants self-seed. In fact, self-seeding might be considered a problem.  In general, the seedlings/fully grown plants don’t compete with most other plants because they leaf at different times.  But, no-one wants a sea of similar leaves across their garden even in winter.  Thus, I now weed out as much as I can, poison the remainder and always endeavour to gather berries that have fallen in late summer.

I am really writing about the leaf patterning.  It can be a winter glory.  Seedlings are always plain green, but by the time they are three years old, any leaf patterning they have will be properly visible.  I have several variants on the nursery – ‘White Winter’ (from Stephen Taffler) is not one of Stephen’s best selections.  The foliage has narrow, white markings that follow the veins.  I have a form I bought from Bressingham called ‘Marmoratum’ which is almost as plain as the straight species with only faint, paler green marbling randomly scattered across the leaves – 4.½ /10.  It certainly is not what is now recognised as ‘Marmoratum’.  I have ‘Pictum’ which should now be called ‘Marmoratum’ with good, broad, whitish-green veining – 8/10.  I was given this (dug-up, free!) on a visit to Avon Bulbs near Bath in 1985 before the company moved.  Two wild-collected selections were sent to me by Edwin Fenwick – ‘Sappho’ with thin, red edge to the leaf and thin, yellowish veining, and ‘Castle Brissac’ with broad, rounded leaves with angular, pale, silvery-green markings – 8½ /10.  ‘Chameleon’ is listed in the Plant Finder as a form of a subspecies – Arum italicum subsp. neglectum.  I argue it is the same basic plant as all the others – Arum italicum subsp. italicum, because I have watched the mutation occur and separated the rhizomes. Whatever!…………..What really matters is the distinctive, rounded foliage that is almost entirely covered in pale green and is very good.  The marking is caused by a separation of the outer layer of cells on the surface of the leaf, and, in the right conditions, you can see condensation inside the leaf underneath.  ‘Da Rocha’ came from Mr da Rocha in Groningen and has large, hastate leaves with the same markings as Arum italicum ‘Chameleon’.

Self-sown Nursery seedlings have produced good, new varieties.  I rate highest “good marked form” which should have a cultivar name – suggest one.  In it, the wide, creamy-green veining randomly covers the areas between the veins making some leaves almost entirely this colour (apart from the edge which is always dark green) – 9/10.  ‘Sparkler’ has broken cream leaf venation on dark foliage giving a sparkling effect – 8/10.  A from with markings almost as good as “good marked form” has (I think) hybridised with Arum maculatum which grows wild around the edges of the nursery, to produce black patches between the veins spots and wide, creamy-green veins.  This is so like one I bought from Holland called ‘Spotted Jack’ that I have subsumed it under this name – 8/10.

All of the leaf markings above are caused (I believe) by the separation of layers within the thickness of the leaves or patches of dark pigment on the outer layer that produces the spots.  One last form is very different, because it has layers lacking chlorophyll and is, in this respect, more like normal variegation.  This is Arum italicum subsp. neglectum ‘Miss Janey Hall’, given me by Peter Hall and named for his daughter.  In it, the leaves have random, creamy-yellow, speckled variegation and have delightful, even broader, green and cream flowers – 8/10.  The other British native Arum maculatum has a properly variegated form too – ‘Painted Lady’ which I bought from Joe Sharman back in 1993.

I reckon I see the start of a trend – a sort of parallel to galanthophilia which might be called “Arumphilia”.  Both snowdrops and arum italicum are winter performers and in winter relatively little is going on which, I think, explains why minute differences in white flowers becomes so absorbing.  At least the difference in arums is easily seen without stooping and kneeling.  Suddenly I have a collection of 30 kinds.

Several have come from Julian Sutton – ‘Angelique’, ‘Chui’, ‘Great Barfield’, ‘Sandy McNabb’ and ‘Yarnells’.  Maybe they need time to settle in to develop their characteristics because so far I’m not much impressed.  Variance in the leaf patterning is about as obvious as the green markings on the inner tepals of snowdrops.  Maybe size is more obviously different because ‘Angelique, ‘Great Barfield’ and ‘Yarnells’ are comparatively tiny.

I was given a distinctive variant ‘Nancy Lindsay’ by one of our W.Co.HPS members – Sue Pacini who was given it by David Bromley who got it from Nancy Lindsay. This has sectors within the leaf which are yellow speckled with green and this pattern develops better on larger leaves from older plants.  So far its stay with me has been in a pot because I’m concerned that if I plant it out it will get lost amongst the self-seeded seedlings and maybe get weeded out.  I shall have to mark its position with something permanent and indestructible because life in pots doesn’t seem to suit arums.

In the years since I wrote the original copy above I’ve selected a number of what I consider distinctive seedlings from the Badsey Nursery stockbeds.  Two are named after grandsons ‘Edward Dougal’ and ‘Idris’.  The true Edward Dougal changed his name legally to simply Dougal (which cost me a hundred pounds or so because I’d bought a plane ticket to conform what I thought would be the name on his passport).  The arum’s name is immutable.  It has broad rounded ‘Chameleon’-like leaves with sharper more sparkling patterning.  ‘Idris’ has green speckles across a central pale green area.  ‘Vires’ describes the leaf shape (arrowhead), ‘Indubitable’ (spotted by Mandie) meaning no shadow of a doubt, behaves weirdly not even bothering to leaf in some years and ‘Uniquity’ (ie. Uniqueness) has been superseded and is a good example of why not to give delimiting names to cultivars.  (Like Alan Bloom’s Erigeron ‘Darkest of All’ which ain’t as dark as ‘Black Sea’.)

Currently my pride and joy is a plant I rescued from Margaret Owen’s former garden at Acton Pigot in Shropshire.  The garden which used to house 4 National Collections has been largely abandoned since her death.  In it the paler green areas on the leaf have amalgamated so that the leaf is largely grey-green with a distinct sharp dark green border breached randomly and in just 2 or 3 places with the central grey-green.  It behaves like a cultivar of Arum italicum but the tubers are different.  I asked Margaret’s son and daughter-in-law to name it and they came up with the name Arum ‘The Patch’ which is the name of the garden it came from and might also be a pun on the leaf patterns.  After this happened Jo Sharman commented that he had given such a plant to Margaret named ‘Monksilver’, so this is what I call it now. It’s good, definitely a 10/10 plant. 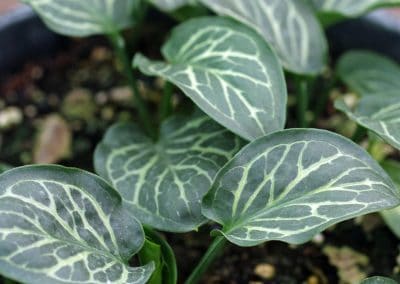 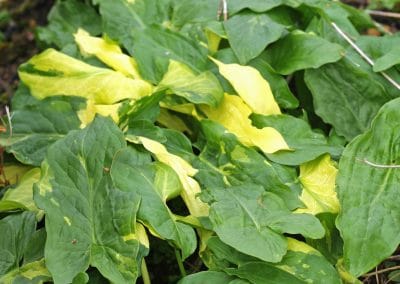 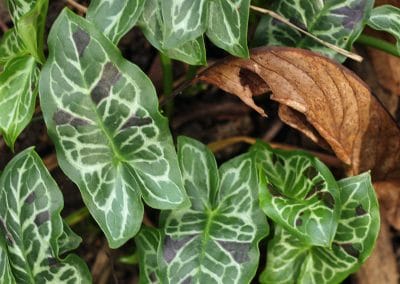 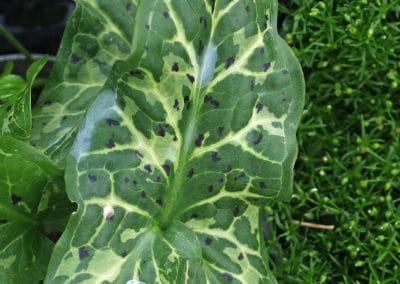 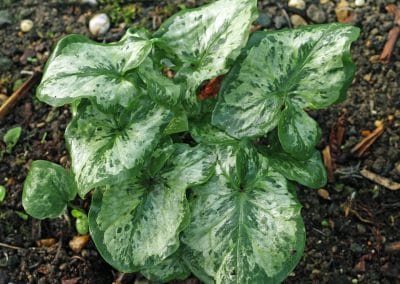 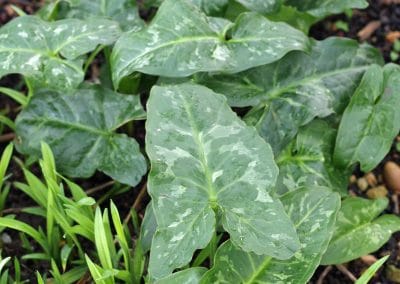 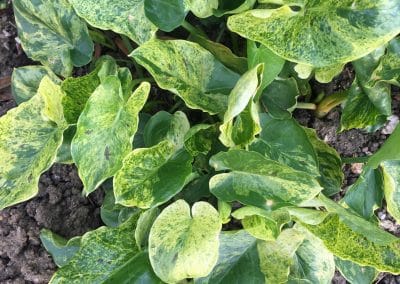 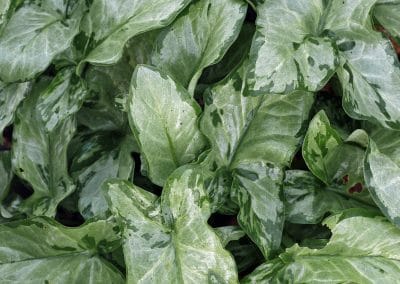 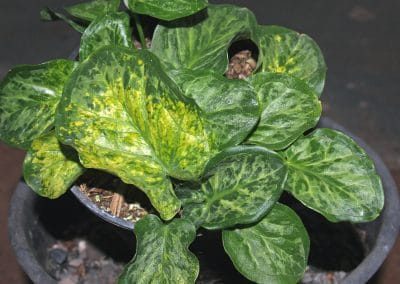 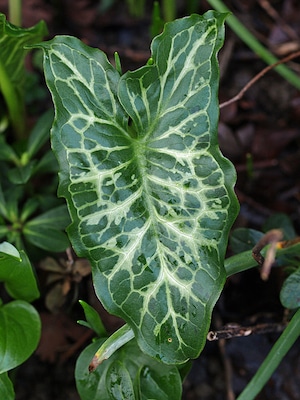 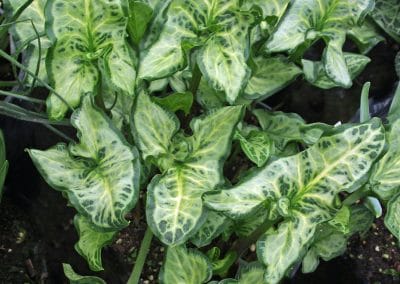 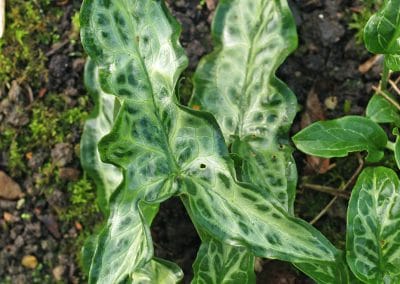 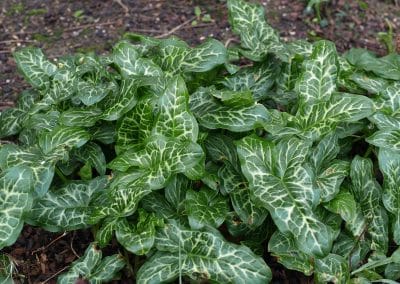 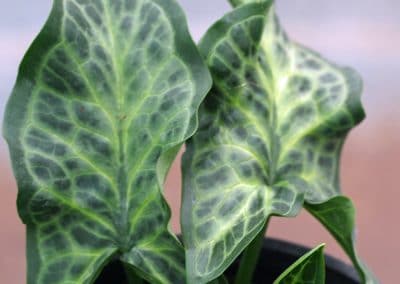